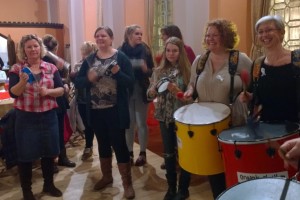 A fantastic night was had by all on 29th November, as WAND held its annual Reclaim the Night walk through the streets of Dorchester. This year, it was a real family affair, as we welcomed men and children for the first time.

The evening got under way and found its beat with the brilliant Organic Rhythm who led a lively samba drumming workshop in the Town Hall which is the usual venue for this event, just upstairs from the Corn Exchange.

Everyone then took to the streets with their instruments and marched through the town drumming as they went. Molly Rennie, a wonderful advocate for the Women’s Refuge, carried one half of the Reclaim the Night banner and the other side was supported by one of gentlemen who attended. 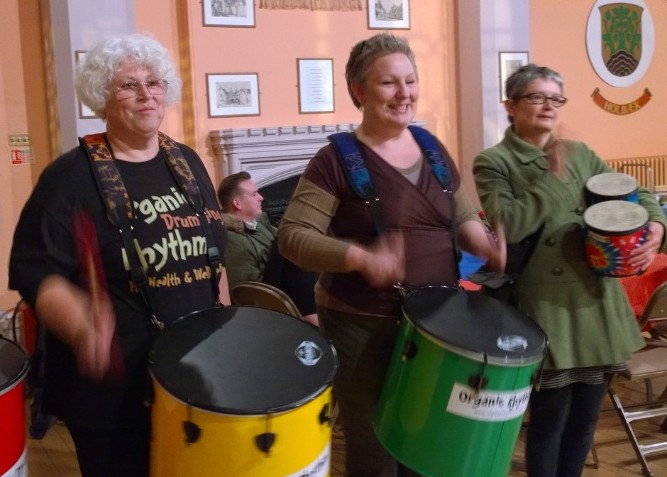 Then it was back to the hall for a delicious supper, then on to the charity auction. A huge thank you goes out to our Patron Tracey West, who was a star auctioneer and of course, to all those who generously donated prizes and to all the enthusiastic bidders; we raised an amazing £420!

We also received £60 in donations from three people who were unable to attend, so in total the event raised £480 for the Welfare Committee of the West Dorset Woman’s Refuge. The money will be used to take the children at the refuge to a pantomime and will allow them to buy their mums a Christmas present and cover the transport costs to take them to visit Wookey Hole, the tickets for which were very kindly donated by Ford Farm.

A great night was held by all, roll on Reclaim the Night 2015 and to ensure you don’t miss the invitation to get involved, why not subscribe to our website and be advised of new postings.

Further Information on Reclaim the Night

The aim of the Reclaim The Night marches give women a voice and a chance to reclaim their streets at night at a safe and empowering event. They also put the issue of women’s safety on the agenda for this night and every day.

Reclaim The Night marches in the UK began on 12th November 1977 with torchlit events held in Leeds, York, Bristol, Manchester, Newcastle, Brighton and London. The marches evolved over the years and went on to raise awareness of rape and male violence generally, giving women one night when they could feel safe to walk the streets of their own towns and cities.

Click here to visit the official website for the Reclaim the Night walks and to find other events around the country.